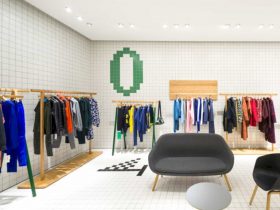 Planet Espresso was developed from the chance to move an adjacent tenancy from the original café in order to make the space lighter, brighter, and welcoming for everyone including the patients.

Inspired by the new tenancy space, the plan layout considered several key requirements proposed by the client. This means the design team was expected to increase capacity so more customers can be served while keeping the functionality of the original café design intact.

Amy Land, as the lead designer, utilized the width of the space to present the front face of the café once the customers enter Planet Espresso. The plan was executed to make the most of the majority of traffic approaching from the main entrance of the Hospital building. Thus, the designer was able to provide greater space for overflow of customers waiting and minimizing congestion in the adjacent thoroughfare.

In light with the function, the design for the counter is based on the same formula as its predecessor. By using the similar design formula, the staff will feel at ease with the familiar system, allowing an additional point of sale and coffee machine.

In designing a hospitality project in a hospital setting, many things must be taken into consideration. One of them is the materiality which is used to project the ‘boutique’ café atmosphere. For this particular project, the café should be simultaneously positioned itself different from Auckland City Hospital environment in an aesthetic way. Regardless, the café should remain practical while fulfilling the requirements of Auckland District Health Board’s various panels.

By ensuring these matters, the team in charge could successfully come up with a space in which cognitively, physically, and visually impaired users can navigate easily despite their conditions. That is why it is important to ensure that Planet Espresso, as a public area within the Hospital environment, is designed in a way that is light, bright, and welcoming without disregarding the workflow and the feel of the Hospital atmosphere.