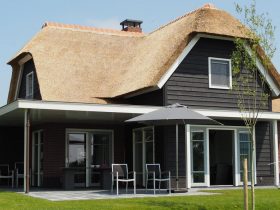 4 Common Reasons Why a Roof May Fail: Is Yours in Good Standing?

More homeowners are opting for green energy sources; the most popular is solar panels. In fact, a solar panel system gets installed every four minutes in America.

What’s the one thing stopping the rest of us from getting solar panels? They ruin our curb appeal.

Luckily, new innovations in solar panels allow us to be green and have an appealing home. Long gone are the days of giant contraptions sitting on the roof. Today’s solar panels are slick, efficient, and non-intrusive.

To see how attractive these new energy systems can be, keep reading. Here are the best solar panel framing choices that won’t be an eye-sore on your roof.

These ugly ducklings are still an option for homeowners and they’re the most affordable. But, they’re also the worst looking.

Traditional solar panels have white backing, silver frames, and lots of wires. They sit obtrusively on top of the roof. They’re kind of like the headgear of houses.

When this technology first came out, green-enthusiasts didn’t care about the aesthetics. It was more about the energy-producing specs than curb appeal. There wasn’t a difference between solar panels for house vs. farm.

Luckily, the look of these waffle panels is in the past. We now have way more options for green energy that don’t stick out like a sore thumb.

A Step in the Right Direction

The worst part of traditional solar panels is the wires. Now, most solar panel systems are wireless. They also sit flatter against the surface of your roof.

Take the Panasonic N330, for example. This system still has the white backing, but the frame is black. It’s sleek and clean-looking which makes it have minimal effect on your curb appeal.

Another version of this solar panel system is the LG330. Since the backing is white, the temperature of the panels won’t increase past usability. It’s also a great introduction to the solar panel world without breaking the bank.

The Good Gets Better

Maybe the thing you hate most about solar panels are the white grid lines. There are now many models that use a black background to prevent that white waffle design.

The LG315 uses this style in its series and homeowners love them. From the road, they look like sleek, black sheets. You can only see the subtle waffle pattern when standing up close to the panels.

You may be wondering, “if the backing is black, won’t these panels get way too hot?”

Unfortunately, although these panels look better, they are less efficient. You pay the price for appealing panels but lose out on some of the effectiveness.

The Best of the Best

The next example of progressive solar panels will have you in awe. Not only are there no waffle lines, but the black background is as efficient as the white ones.

SunPower’s Maxeon Cell panels use an anti-glare glass over the all-black solar cells. These cells are not only appealing to the eye, but they’re very efficient. In fact, you get 60 percent more energy for your money than any other system on the market today.

What makes these solar panels so efficient? You need fewer panels to produce ample amounts of energy. That means your whole roof doesn’t need to get hidden by panels.

And, the frames sit seamlessly on your roof with the Invisamount racking system. Even if you have an irregular-shaped roof, these panels can adjust to fit your house.

The Future of Solar Panel Aesthetics

Instead of having a frame system sit on top of your roof, you can make your roof out of solar panel tiles. Musk announced this awesome system, Solar Roof, in 2016 and is taking pre-orders.

Not only is it appealing to the eye, but it’s customizable. You can adjust the energy capacity you want the Solar Roof to produce.

It’s also more durable than regular roofing materials. You get a lifetime warranty on tiles and a 30-year power warranty. That’s one less house maintenance expense to worry about.

Should I Wait for Tesla?

Obviously, the most attractive choice for homeowners is the Solar Roof from Tesla. But, no one knows when they’ll be installing them or selling them. Right now, homeowners can only reserve their spot to buy them.

If you want to start your green energy efforts now, there are other options.

The SunPower model is efficient and more attractive than past models. The LG315 and the Panasonic N330 are affordable and a step in the right direction.

For Tesla competitors that are currently on the market, expect efficiency and appeal. The Dow Powerhouse shingles get installed with asphalt shingles onto the roof deck. Although the whole roof isn’t made of these shingles, they appear to blend in with the asphalt.

Depending on your roof’s pitch, these solar tiles and shingles can appear barely-there. Tesla is the only company that makes an entire roof out of solar panels. But, these built-in solar tiles can look just as appealing to the eye.

Are you ready to take the plunge into green energy? More and more American homeowners are opting for this route because of the savings. And, because of the minimal affect solar panels have on the environment.

But, no one wants an ugly contraption sitting on their roof for the neighbors to see.

The solar panel framing systems of today are much more attractive than in the past. They sit flush against the roof or get built into the roof. Eventually, we’ll have entire roofs made of solar tiles and shingles.

You can boost curb appeal in a ton of different ways, not only by choosing the best solar panels. Stay on top of the news and trends in home renovations for the latest innovations. Your home is your sanctuary; make it perfect for you and your family.