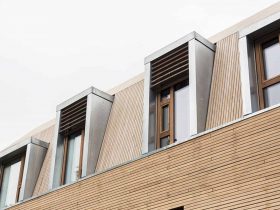 The Municipal Offices and Station Hall built by Mecanoo is considered as a new landmark in the historic city Delft, Netherlands. The building is located above a new underground train station with offices that accommodate every municipalities’ employee. Given the building location, the old railway viaduct that divided Delft’s inner city has made way to extend the city center, a park, and canal.

The Municipal Offices and Train Station 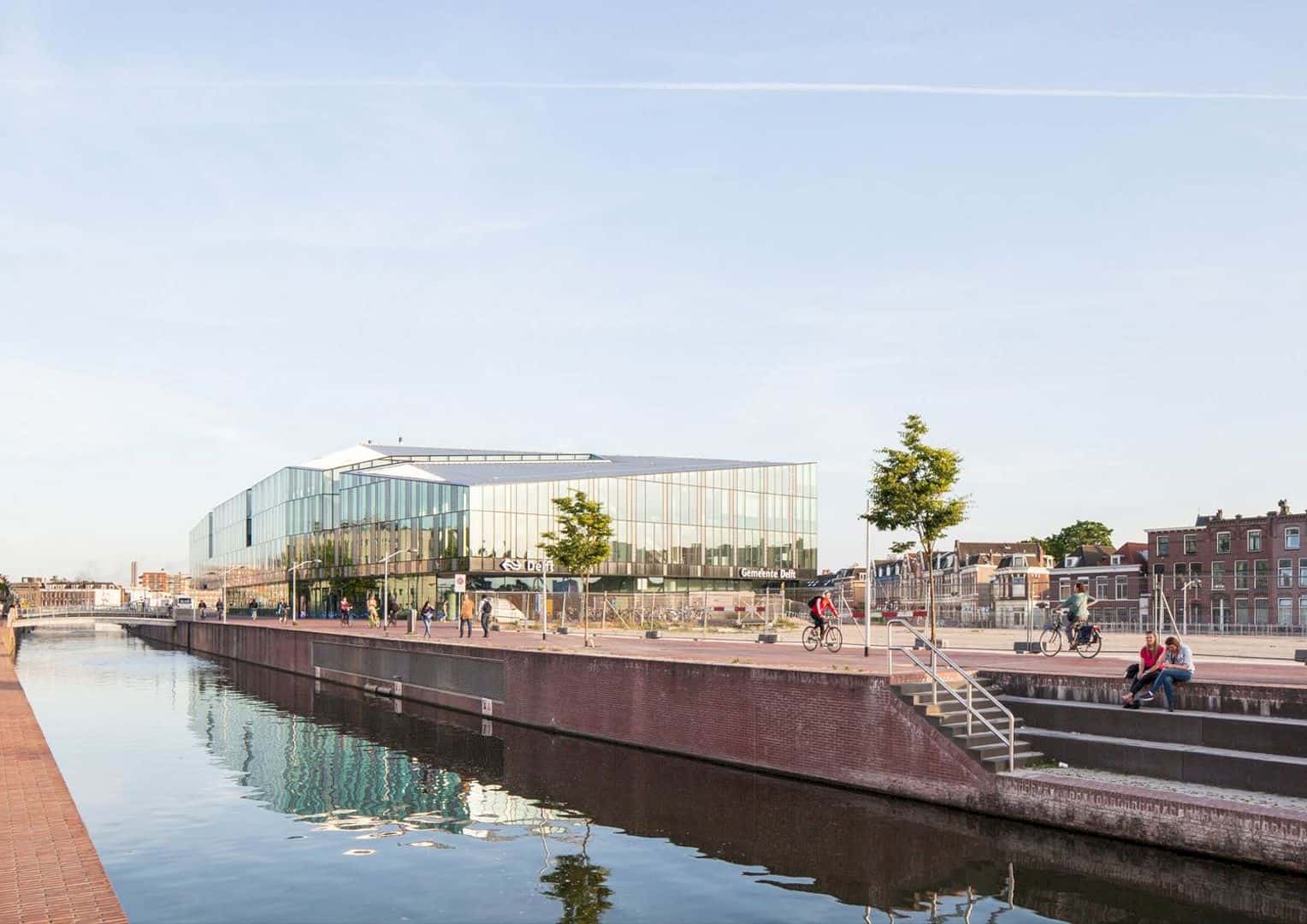 The Municipal Offices and Train Station comes with no apparent front or rear and a glass cladding that is flexible and compact. 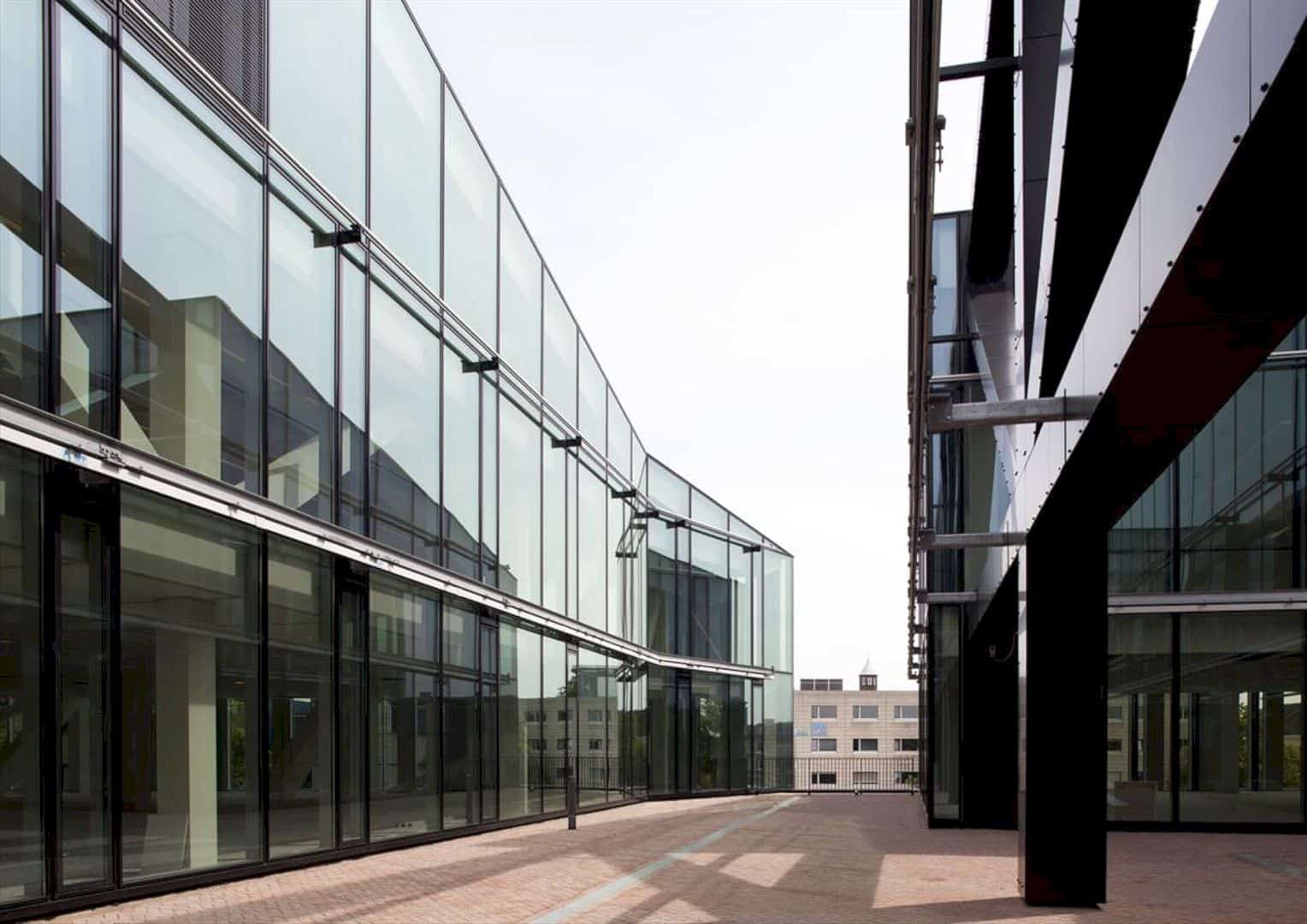 Focusing on the glass cladding, you can see incisions echo the networked structure of laneway in Delf as well as allow the daylight to flood the building within. The architecture firm then decided to lower the roof line at the corners in order to reduce the building height and enable a gradual transition to the nearby buildings. 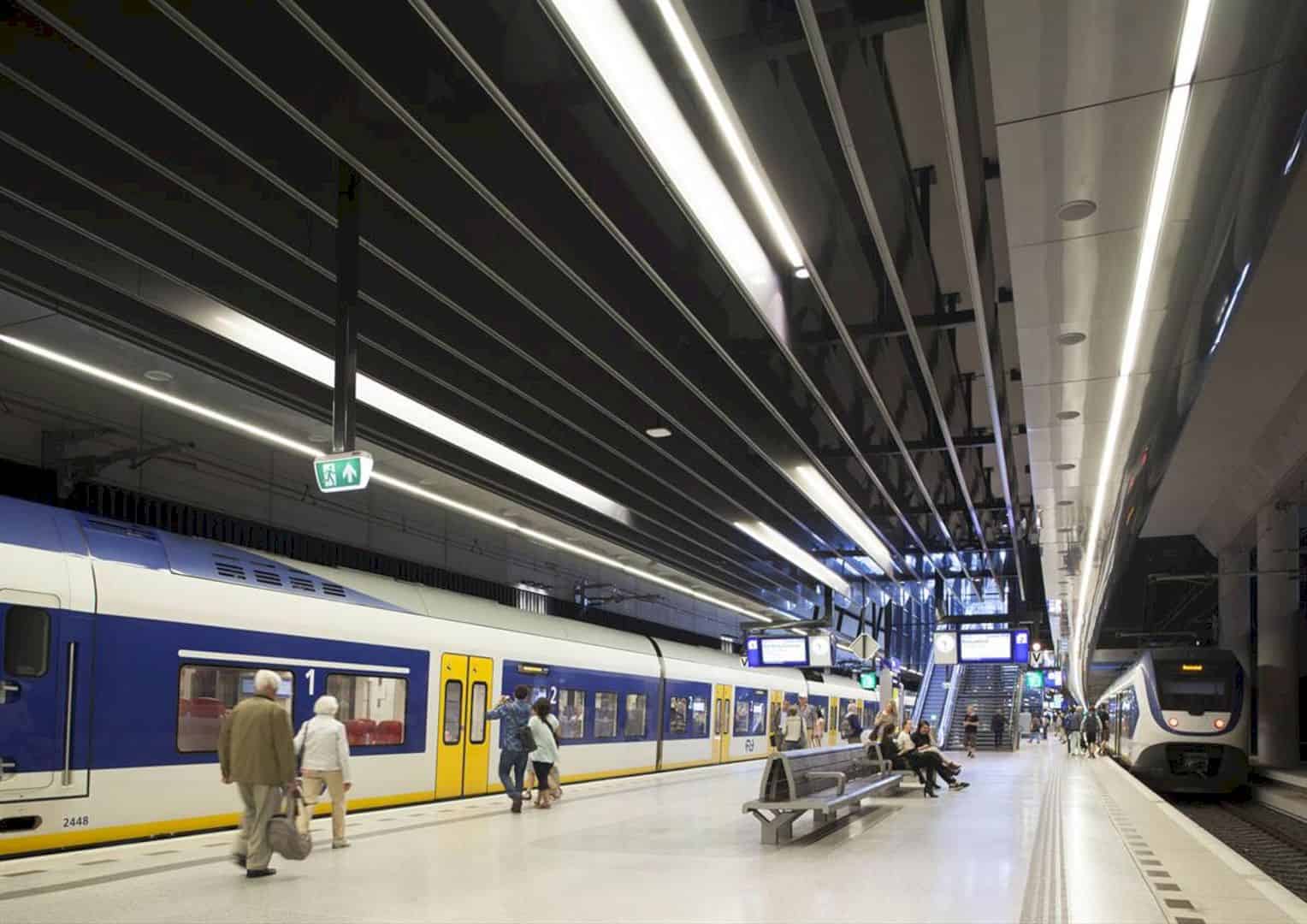 The building itself holds solar panels on the roof, generating at least 20% of the building’s energy needs.

The Use of Clear Glass

A clear glass was selected for the ground level to facilitate a close connection between the outside environment and the inside of the building. 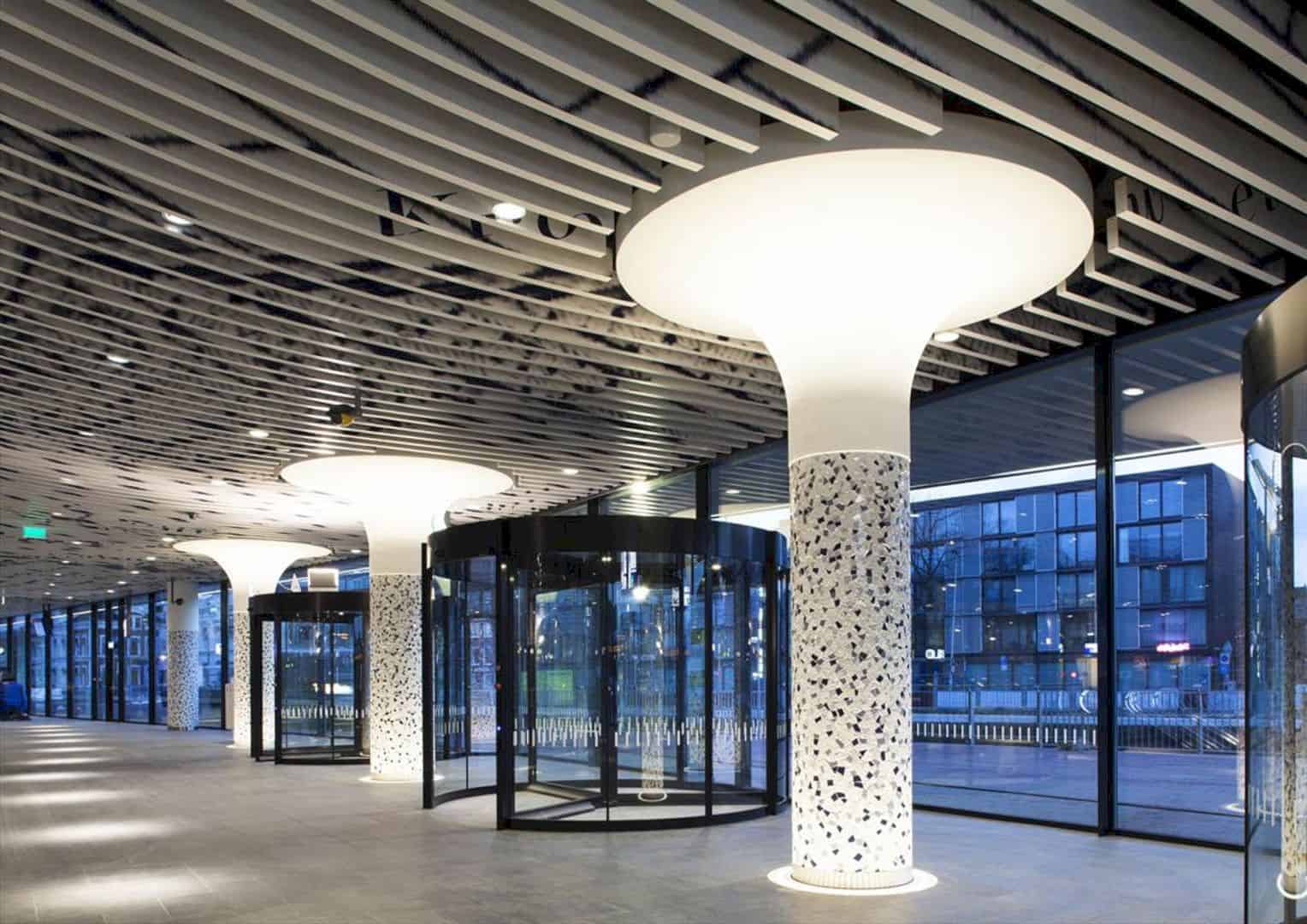 Within the station hall, a contemporary re-interpretation of Delft Blue tiles were incorporated into the columns and walls. 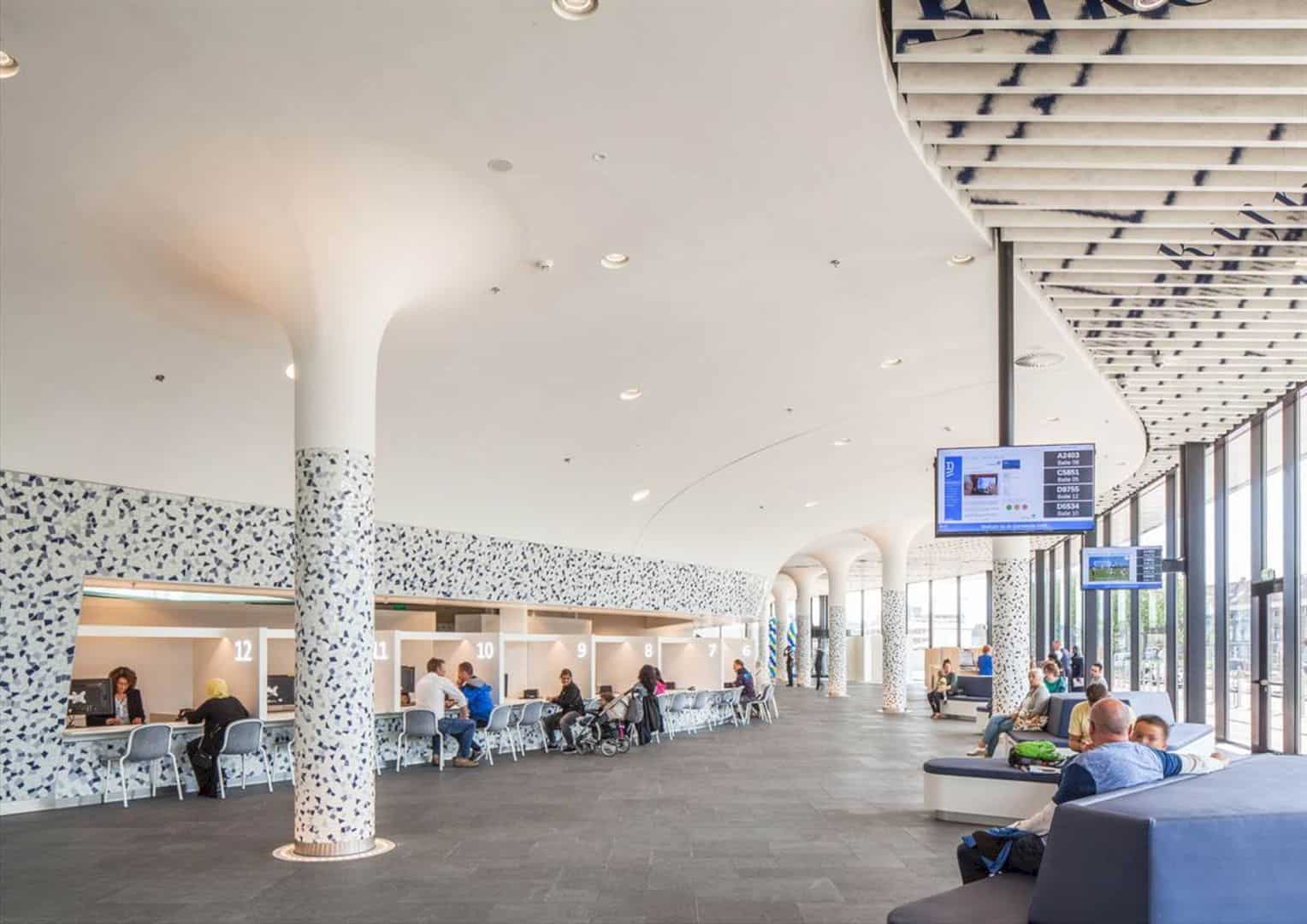 The public zone, such as the public lobby and station hall, is separated from the private areas where municipal offices are located and designed with transparent, molten glass elements.

A Historic City Map on Ceiling 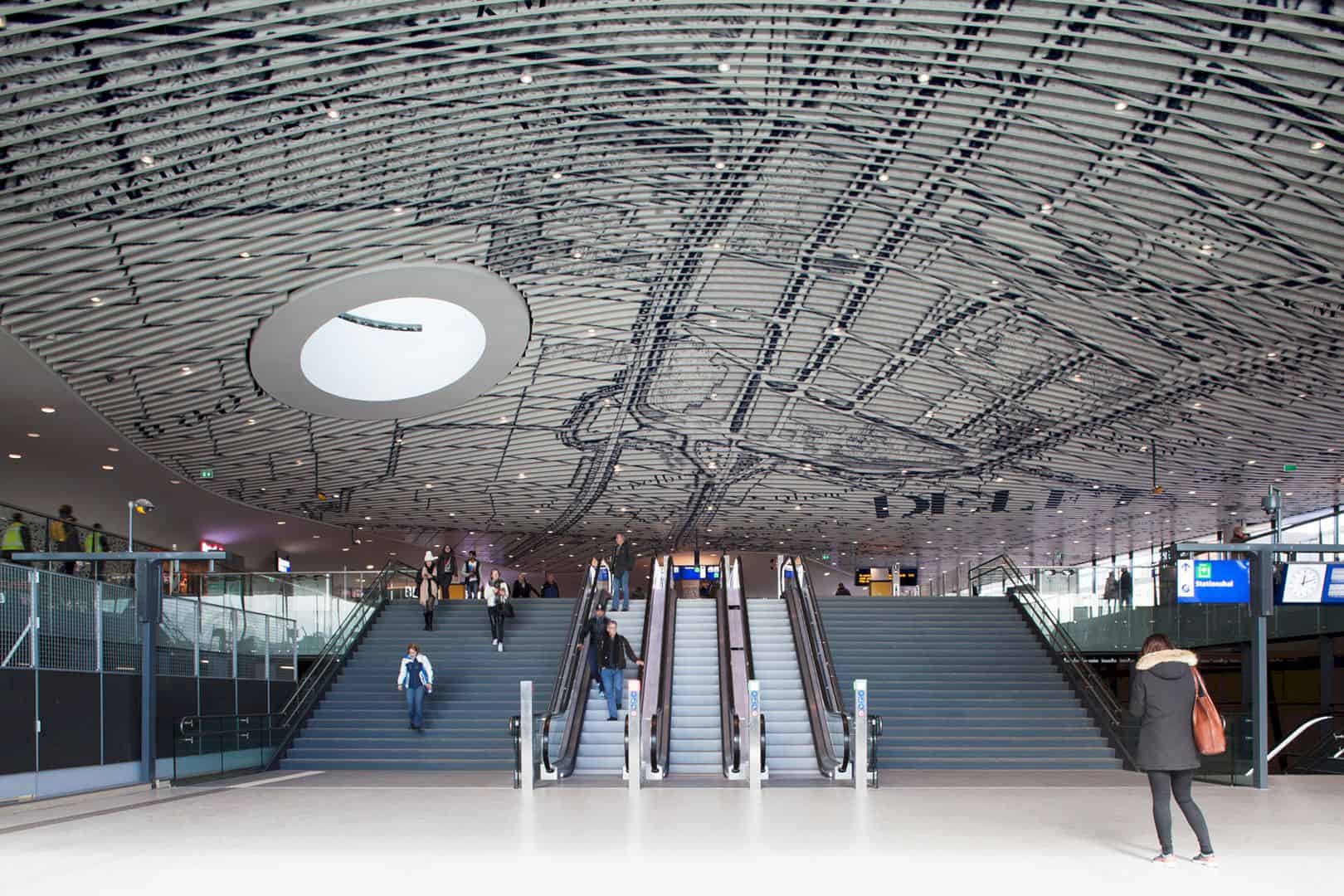 A blue-colored historic city map of Delft in 1877 adorns the ceiling of curved white horizontal strips above. 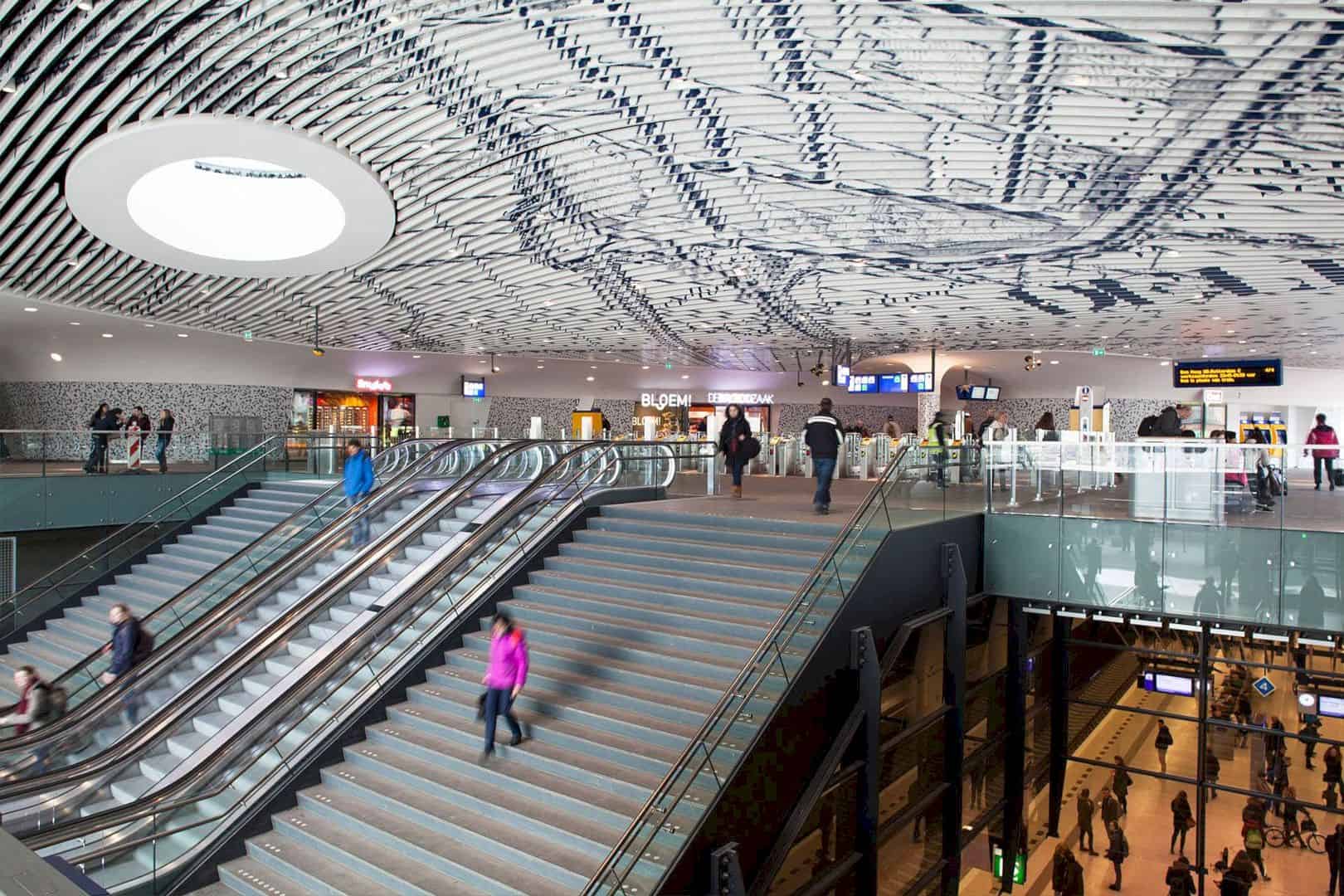 This sight can be seen in public lobby and station hall. 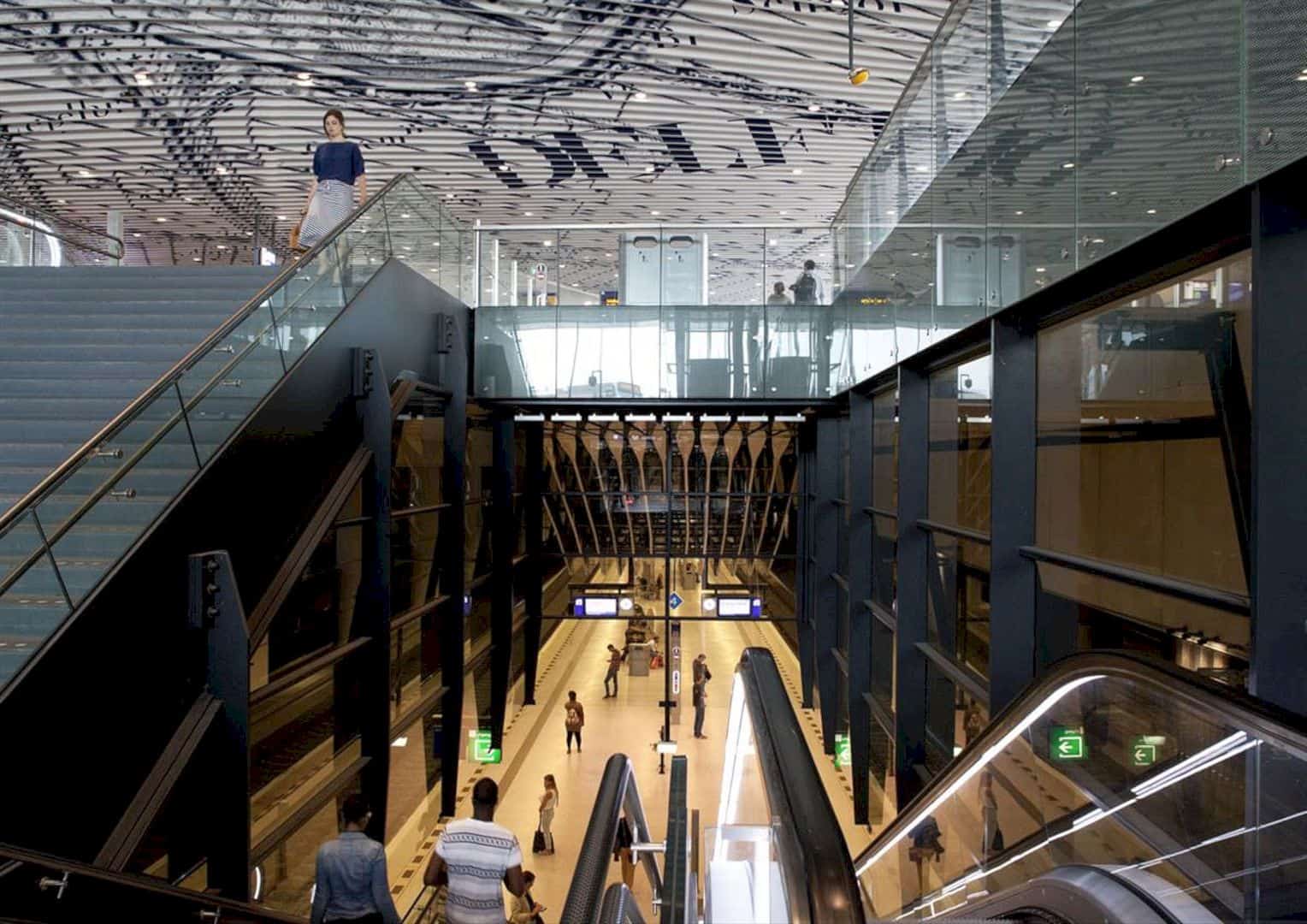 The work itself was the result of collaboration between Mecanoo and Geerdes Ontwerpen. 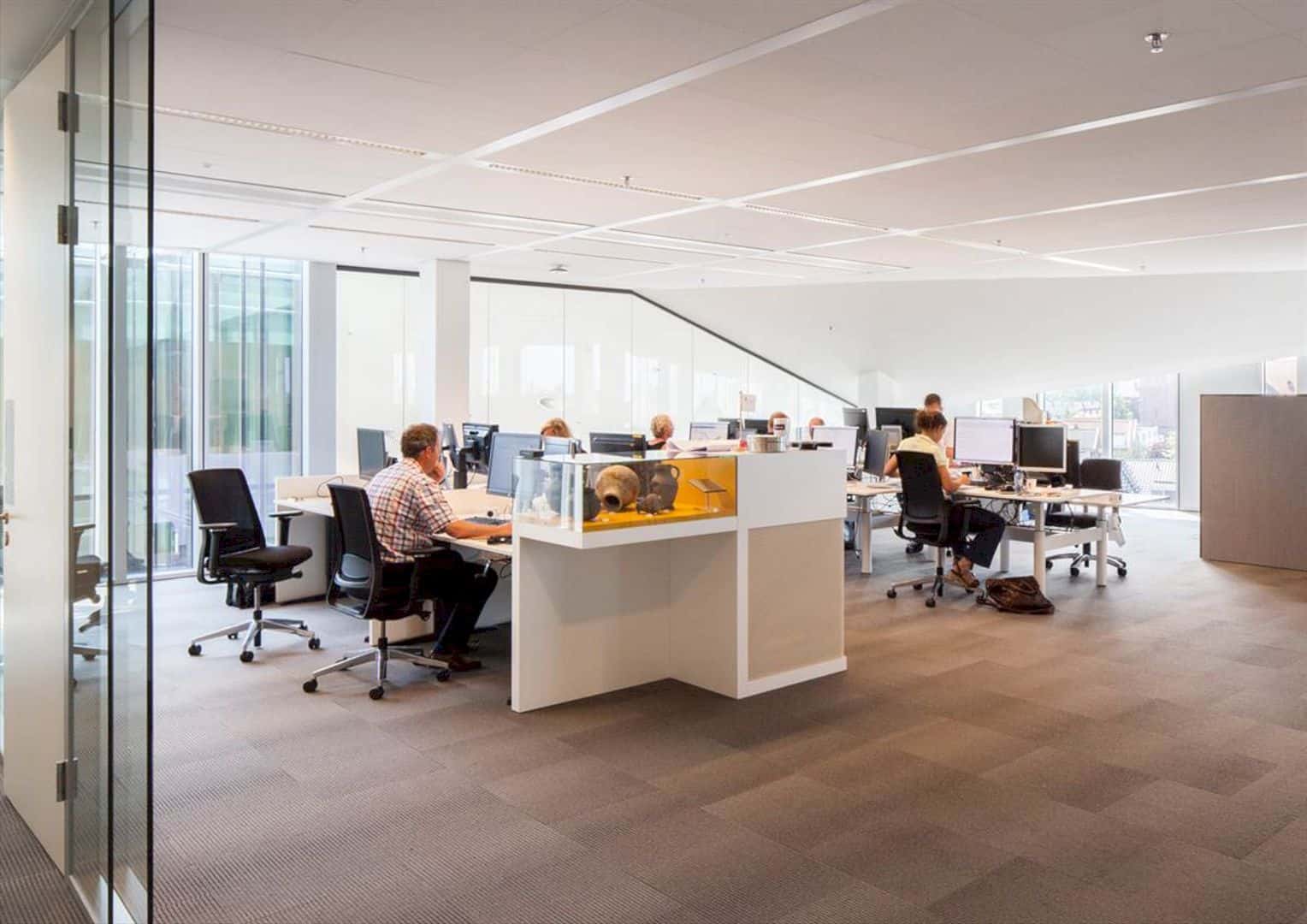 Meanwhile, the halls are separated by using a glass wall and two volumes. 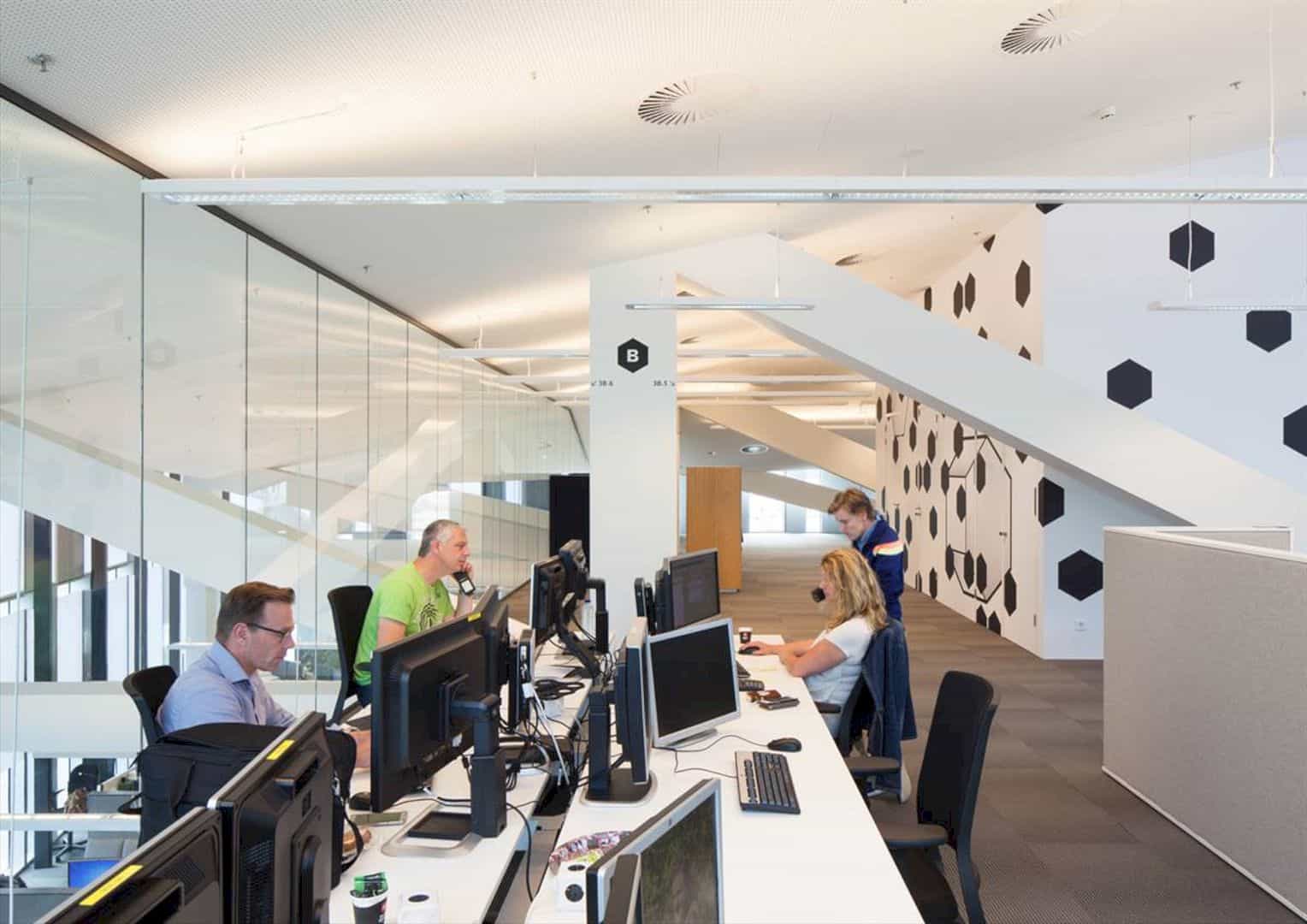 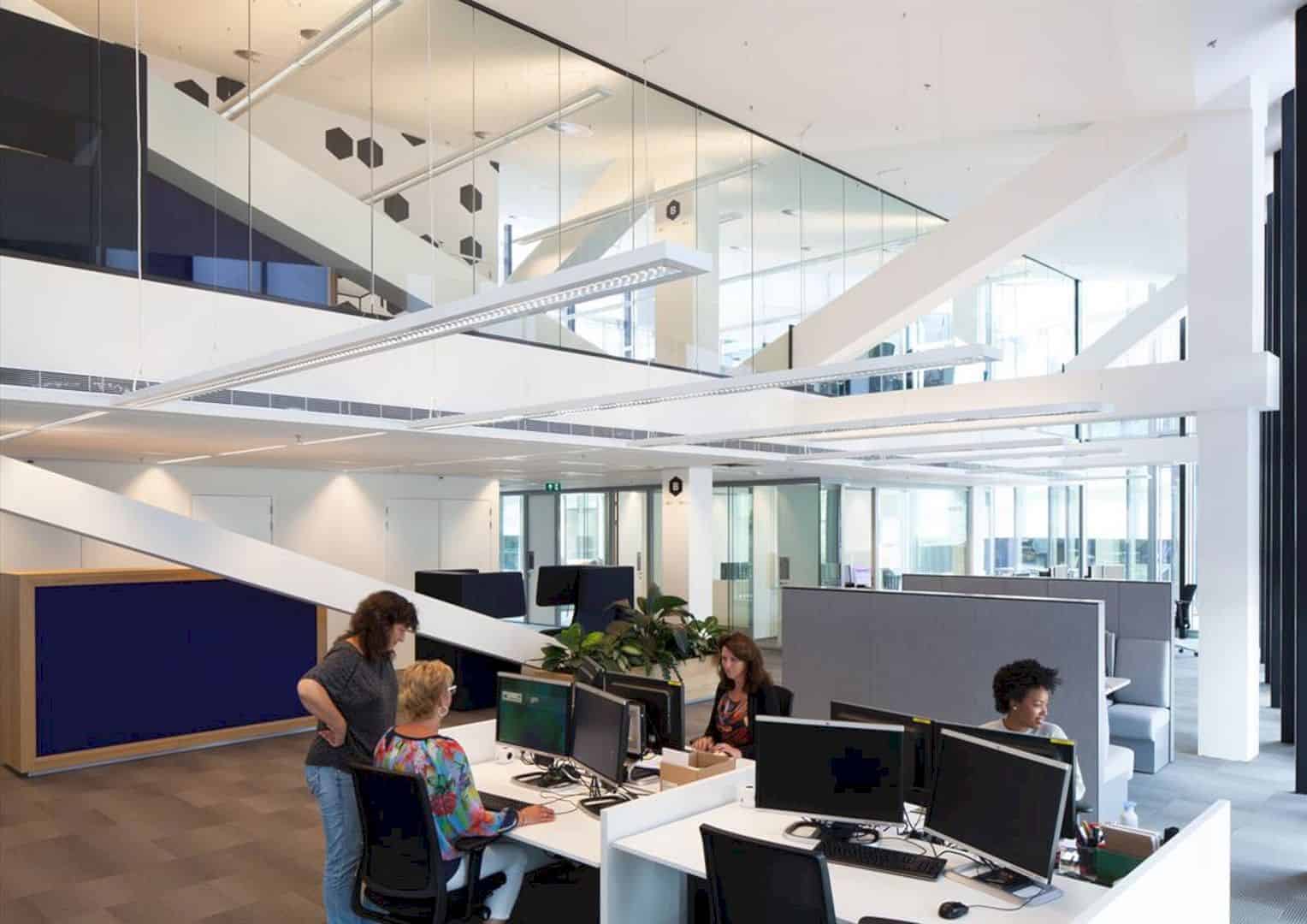 The two volumes house consultation rooms and technical services of the municipal offices as well as the public counters and the commercial functions of the station hall.

A Glimpse of Historic City 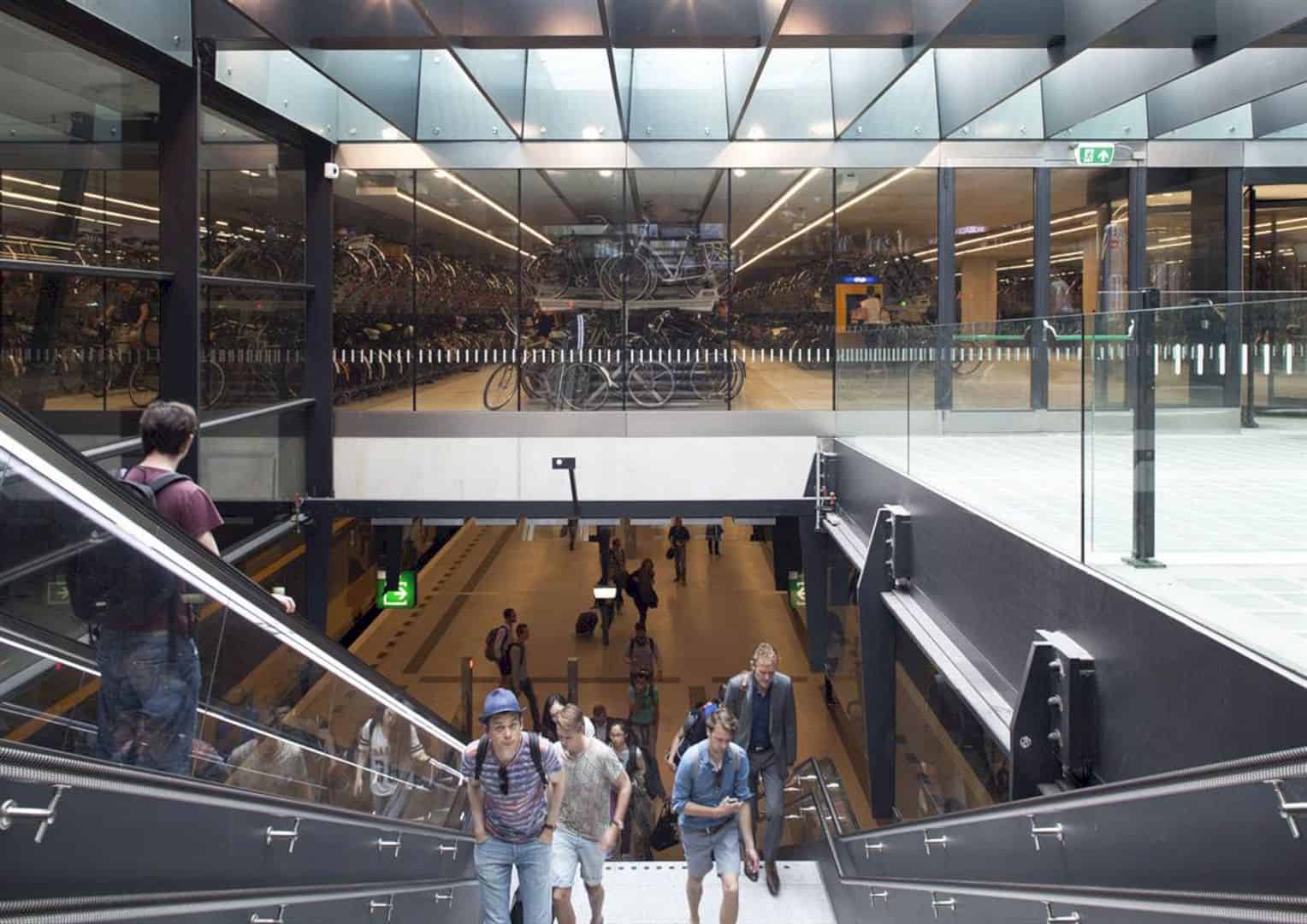 The building was organized so that the travelers can have a look at the historic city immediately from the station hall. Measures include a geothermal heat pump and an optimal façade design showcasing highly insulated glazing to reduce 35% of energy use from prescribed requirements.