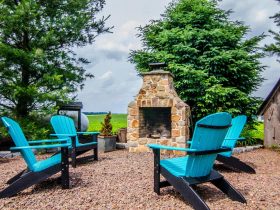 5 Ways to Enjoy Your Outdoor Living Space All Year

With more and more people deciding to live in urban spaces, it doesn’t come as a surprise that we keep seeing experts rethinking and transforming old exteriors into something completely new. They use new creative, social, and digital concepts to bring old exteriors to life. And there’s no need to say that this is exactly what urban spaces nowadays need. For a glimpse of these inspiring ideas, make sure you read on and take a closer look at some of the following urban space transformation ideas.

It’s no secret that there are so many vacant lots out there that simply didn’t get to reach their full potential. These spaces just keep occupying land that could be used in so many different ways. Luckily, young people are showing initiative to have vacant lots transformed into something people living in urban areas can benefit from. Young architects don’t want to see land owned by city left unused. That’s why they come up with new ideas the city board might be interested in. This is exactly what happened in the city of San Diego where architect students started a project that targeted specific empty lots in the city that could be reactivated as a public space. They came up with an idea to turn this lot into a pop-up marketplace. Many young people have already decided to follow their example and start similar projects.

A lot of old homes are simply too small for people who live in urban areas. However, this doesn’t mean these need to be torn down in order to build something new. In fact, more and more people are deciding to add extensions to their existing homes not only create more living space but improve the look of their exterior as well. Luckily, projects like this are no longer difficult to deal with. There are new pieces of equipment contractors use to get projects like this finished in no time. For example, you can now rent a mobile crane that can easily be moved around the site. Combine pieces of equipment like this with new architecture trends and adding an extension can make any old home feel new. Moreover, this means better-looking houses that fit perfectly into urban spaces. Another great idea many modern homeowners seem to like is converting an integrated garage into a living space.

With the way urban spaces are now being designed, there’s less and less space for greenery in big cities. However, this doesn’t stop architects from making this space greener. They’re constantly coming up with new ways to include greenery into their constructions and give big cities that natural element they crave. Just take a look at some new buildings and chances are some of them will be green. For example, Rolex’s new Dallas-based building has been specially designed to incorporate nature into every floor. This building, in particular, has a rooftop garden and landscaped terraces. On top of this, more and more artists are trying to contribute to making urban spaces feel greener. Graffiti artists such as Philipp Kabbe from Hamburg are incorporating natural elements such as plants and woodland creatures into their work. Their idea is to provide an inner-city retreat to citizens and discourage visual vandalism at the same time.

It’s safe to say that people are now putting a lot of time and effort into transforming old exteriors. The above-given ideas are just some of the examples of the transformations people living in urban spaces are witnessing. Hopefully, people will keep redefining urban spaces and we’ll get to see cities become more livable.